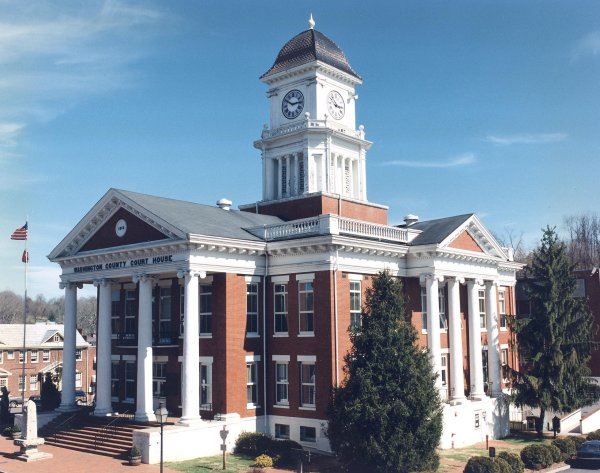 Washington County has had an operating local government longer than any other county, city or town in Tennessee. In fact, its been around longer than Tennessee has been a state. Washington County's government predates Tennessee by 19 years, stretching back to 1777, when a group of pioneers who had crossed the Alleghany Mountains and settled in the area's river valleys established a government in Jonesborough. At the time, Washington County was admitted as a part of North Carolina and called the Washington District. It is the first-ever governmental division named in honor of George Washington. Its early leaders included John Sevier, Tennessee's first governor and, before that, governor of the short-lived (1785 to 1789) State of Franklin.

Washington County covered nearly all the territory that would some day become Tennessee, but soon gave birth to Sullivan County, and later to Greene and Davidson counties, all in the days before Tennessee proper existed. As the principles that would embody American government formed in crucibles throughout the colonies, including the area that would soon become the State of Franklin and whose governmental epicenter was Jonesborough. Jonesborough served as the capital of the State of Franklin in 1784 to 1785. Around the time future President Andrew Jackson was doing his frontier lawyering in Jonesborough, Washington County and the town served as the Judicial Capital of the Territory South of the River Ohio (1790 to 1796).

Today, Washington County's government strives to uphold the traditions of independence and representative democracy that were forged more than two centuries ago. It does this through the actions of the County Commission, County Mayor, and other constitutional officeholders.

A Commitment to Transparency

Local government plays a significant role in the lives of most citizens. Taxpayers deserve access to information about how their local government is choosing to use resources that come from their tax dollars. The Washington County Mayor's Office believes taxpayers and citizens deserve open and transparent government. This space offers all the information that County Commissioners use to prepare for each month's meeting. The "agenda packets" are completed and distributed to commissioners before each month's full Commission meeting.

Minutes from each monthly Washington County Board of Commissioners meeting are not official until approved at the following month's meeting, at which time they are posted to this website.

Citizens can also view the Archive Center for information on county finances, from revenue statistics and budget data to copies of Washington County's annual independent audit.